Werner's interest in automobiles was started while taking auto mechanics at Preston High School. This together with working on his families cars (he is one of eleven children) resulted in him taking an apprenticeship with Wolfgang's Auto Service in Kitchener. This experience laid the ground work for him to eventually start his own garage, as he was largely responsible for the day to day operations of the business.

After finishing his apprenticeship in 1979, Werner spent several months backpacking through Europe and then stayed to work at a garage in Germany for 5 months. After returning home Werner, driven by an entrepreneurial spirit, started his own business first in his dad's garage and then taking over Len Shortreeds Sunoco station on Grand Ave. In 1983 he built the present location doing much of the work himself with the help of his family. The same year he became engaged to wife Joanna and with her help, especially in those early years, the business continued to grow through the years into what it is today. Werner and Joanna have 4 children, all of whom have helped out in the business from time to time. Besides running a successful business, Werner has been very active in his church and holds the responsibility of being its pastor. Willy is Werner's brother-in-law and joined the team in May 2006 after moving to Cambridge from New Jersey. Willy brings with him more than 23 years of experience in the automotive field, having worked for Mercedes Benz of USA most of his engineering career. He has extensive knowledge in many aspects of the automotive industry, and he retired from Mercedes-Benz as a senior manager responsible for their parts and service network. With Willy taking over the responsibility of overseeing the service portion of the business, this has given Werner the opportunity to concentrate more on used car sales. Willy and his wife Barbara and their 3 children live in Clyde. Ashley joined Werner's Auto Service in June of 2015, to take over for Emily. Ashley graduated from Woodland Christian High School in the same year and began working at Werner’s Auto shortly after. She has quickly caught on to her responsibilities as office administrator and receptionist. Her warm and friendly personality makes her a welcome addition to the team. Ashley lives with her parents in Cambridge. Jessie served as Office Administrator for Werner’s Auto Service from 1994 until 2006. After leaving to raise her three children, she is now back working part-time managing the accounting at Werner’s Auto. She is a familiar face to many of our long-term customers and loves the flexibility of working part-time from home and raising a family. Jessie and her husband Jon live in Cambridge with their three children. 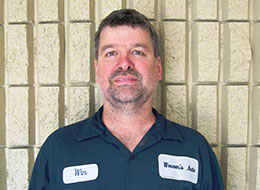 Win Walter began at Werner's Auto Service back in 1985 as an apprentice and for more then 25 years has been well known to many customers. His hard work, extensive knowledge and very likeable personality all help him carry out his responsibility as shop foreman. Those responsibilities include overseeing the shop, sharing his experience with the other techs, training the apprentices, diagnosing the "tough ones" and much more. Win and his wife Merrily and their 3 children live in Cambridge. 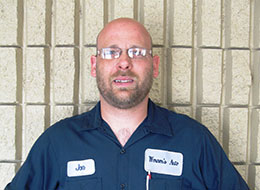 Jon has been working at Werner's Auto Service since 1994. He began as an apprentice and has been a licensed technician since July 1999. Jon is very dedicated, hardworking and willing to take on any job that needs to be done. Jon is married to Jessie who worked in the office for 11 years. They have 3 children and live in Cambridge. 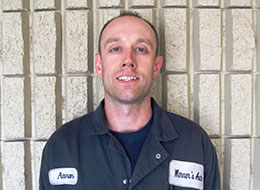 Aaron first came to Werner's Auto Service as a co-op student in high school and then continued on as an apprentice. He has been a licensed automotive technician since 2004. Aaron works hard to get each job done correctly the first time and is continually learning and upgrading his skills. He takes great pride in his extensive collection of tools. Aaron and his wife Wendy have two children and live in Cambridge. 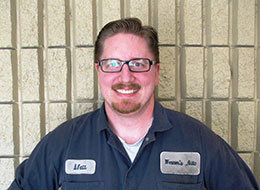 Matt began at Werner's Auto Service in 2002 as an apprentice and since then has become a licensed automotive technician. Matt strives to provide each customer with the best possible service and as a result is continually upgrading his skills and knowledge. In his spare time Matt enjoys working on his Camaro, which he re-building from the ground up. Matt and his wife Csilla have one child and live in Cambridge. 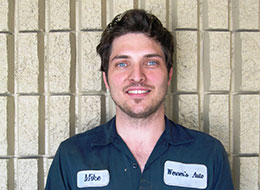 Mike first came to Werner's Auto Service as a co-op student and worked part time cleaning the shop. After graduating from high school in June 2006 he started his apprenticeship and is now a licensed automotive technician. Mike is ambitious and eager to learn as much as he can. Mike and his wife Rachel have two children and live in Cambridge. Benjamin is Werner's only son and has chosen to seek a career in the family business. Beginning as an apprentice in June 2006 he sees the value of learning the business from the bottom up. He has reached his goal of becoming a licensed technician and will continue to learn both the sales and service sides of the business from his dad. Recently he has been focusing his efforts toward the car sales side of the business and joins his dad at the auction to buy quality used cars to sell. Ben and his wife Lori-Beth have three children and live in Kitchener. Curtis began working at Werner's Auto Service the summer of 2013. He completed his apprenticeship in 2015 and is now a licensed Automotive Technician. He continues to sharpen his skills in the automotive trade. Curtis is a diligent worker and is eager to learn as much as he can. Curtis lives in Cambridge with his wife Taylor. Erik is the son-in-law of Werner and has joined the team at Werner's Auto Service as a part-time car detailer. He came from Brazil and married Werner's daughter Rosilda in August of 2012. His warm smile and good attitude makes him a welcome addition to the team and he gets along great with the other employees. Erik lives with his wife Rosilda in Kitchener.